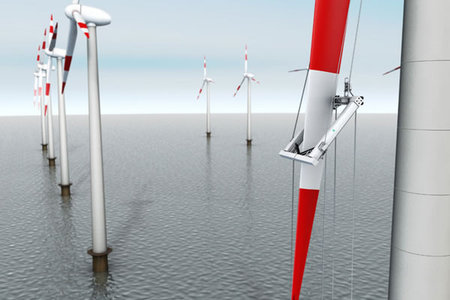 Colossal colonies of lofty wind turbines churn out gusty energy that renders freedom from the grids. Putting them up is a task that needs expertise no doubt, but it’s the maintenance that requires more skill. Last month I came across a picture that showed a man slithering down a cable from a helicopter on to a wind turbine to carry out repair work. Man that was a scary! But researchers at the Fraunhofer Institute for Factory Operation and Automation (IFF) have found a robotic solution to this elevated challenge. They have developed a new robot that inspects wind energy converters and detects the minutest damage even below the surface. RIWEA, the robot hauls itself up a rope foot by foot until it reaches a wind turbine’s giant rotor blades. Shaped out of glass fiber reinforced plastics.

The inspection system consists of three elements: An infrared radiator conducts heat to the surface of the rotor blades. A high-resolution thermal camera records the temperature pattern and thus registers flaws in the material. In addition, an ultrasonic system and a high-resolution camera are also on board, thus enabling the robot to also detect damage that would remain hidden to the human eye. A specially developed carrier system ensures that the inspection robot is guided securely and precisely along the surface of a rotor blade.
Source