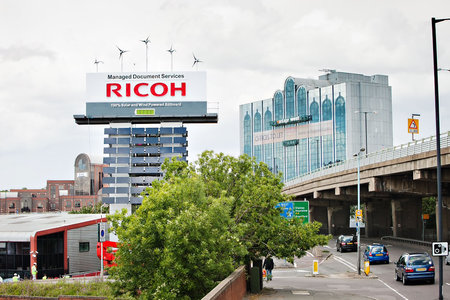 A while ago, we had got wind of Ricoh’s solar-powered billboard set up in Times Square, New York. Happy with the success of the billboard and all the coverage it received, the company has gone a step further and unveiled yet another solar-powered billboard, this time located in London, across the pond, shining down on drivers on the M4 motorway headed for the Heathrow Airport. Using 96 solar panels and five wind turbines, this billboard is greener than green and portrays the company’s initiatives to go green and turn sustainable, decreasing the carbon footprint being stamped out on our planet.

This one works as a solar-powered shining inspiration for other companies too, who currently hook on their energy-sucking billboards to local grids.
[ZDNet]