Playgrounds that generate energy from children! 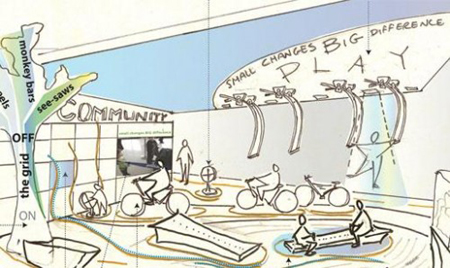 You might have heard of the Red Dot winner, the Natural Energy Park before. Now designer Theresa Ling working on a similar concept, has come up with a novel way to generate energy! We all know how energetic kids are. They run, scream, play, jump and yet never seem to tire. So, Ling thought of a way to innovatively convert all this energy into electricity. More like making a hamster run in a wheel to power a little light bulb, Ling’s Energy Harvesting Playground uses a prototype of an interactive see-saw powered by the kinetic energy of the see-saw’s up-and-down motion. A DC motor attached to the pivot point does the job of powering the LEDs. That’s not all. Designer Wendy Uhlman came up with the Powerleap Playground that harnesses kinetic energy from children’s movements.

Energy generation has never been so innovative before. The kids have all the fun in the world in these playgrounds, and at the same time receive some subtle education regarding renewable energy!
[energyharvestingjournal]