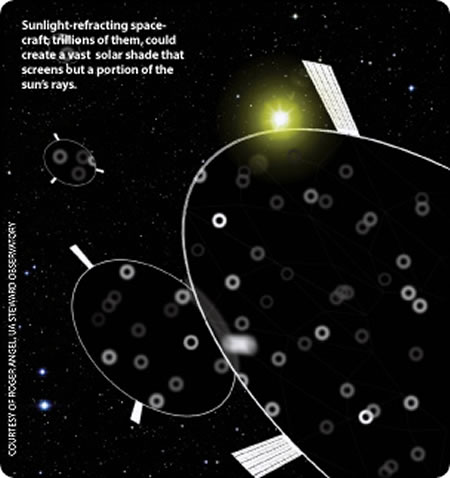 Never doubt the strength of a scientific experiment. Especially ones that work. a certain Dr Roger Angel from the university of Arizona has come up with a plan to reduce global warming. But as is always with experiments, it comes with a list of ‘ifs’. What he said was if a trillion mirrors were thrown into the outer space, we could see a reduction in global warming for 50 years. Now this is IF they are able to get the experiment fool proof and devoid of any small hitch also as it involves a hell lot of force. The mock space mirror gun he made had a force of 10,000g which is a lot more than a normal gun using 100g force. Next is if this is done, what will be its impact on the planet’s eco system?

Lastly but very importantly comes the price. It would cost them $350 trillion which they say are ‘worth every penny’ and has to be replaced with new ones every 50 years. When these experiments are in fiction, we can at least fantasize it but if someone comes and says he can help save the world by shooting mirrors into space at a cost more than the GDP of all the developed nations put together, there is a creeping sense of doubt.
[Greenoptimistic]