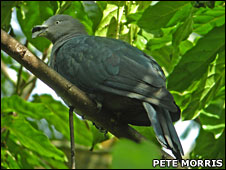 Climate change has become firmly established as an accelerant to many of the factors which have put one in eight of the world’s birds at risk of extinction, 2008 IUCN Bird Red List warns that long-term droughts and extreme weather puts additional stress on key habitats. The assessment lists 1,226 species as threatened with extinction – one-in-eight of all bird species. In the revised Red List, eight species have been added to the “critically endangered” category. One of them is the Floreana mockingbird (Nesomimus trifasciatus), which is confined to two islets in the Galapagos Islands has reduced from 150 in 1960 to less than 60 today. Another example of a species being affected by shifts in the climate was the akekee (Loxops caeruleirostris), a Hawaiian honey-creeper. It’s being negatively impacted by prolonged heavy rain causing nesting failures, but they are extremely threatened by introduced diseases, which are carried by invasive mosquitoes. The mosquitoes have been restricted to lower altitudes, so the birds do best at heights above which the mosquitoes can go and pass on avian malaria. But because of climate change, the temperature zones are shifting. It is getting warmer at higher altitudes, so the mosquitoes can now move higher. This is eliminating the mosquito-free zone that the birds used to occupy.

Despite the latest assessment showing a continuing downward trend in the world’s bird populations, conservationists are still optimistic that many species could be saved. One bird that has been downlisted from Critically Endangered to Endangered in the latest assessment is the Marquesan imperial-pigeon (Ducula galeata). The main threat facing the bird came from rats, an invasive species. In order to protect the population of the slow-breeding birds, conservationists moved 10 adults to a neighbouring rat-free island between 2000 and 2003. The new community of pigeons is now established on the island, and conservationists are hopeful that the population will reach 50 by 2010.
Source