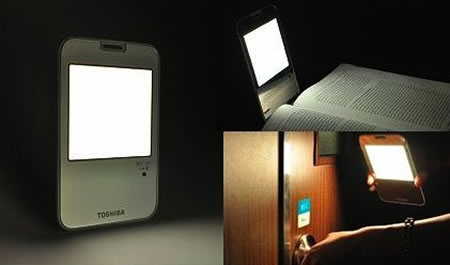 In a bid to help those stricken by the natural calamities that struck the land of the rising sun, Toshiba is busy rolling out OLED lamps that are being donated to evacuation centers in Japan. The company plans to produce about 100 lamps like these, 50 of which have been sent to Kesennuma City, Miyagi Prefecture. And to charge these up, Toshiba has also sent out solar-powered rechargeable batteries, making these lamps sustainable and powered by renewable energy. Using four AAA alkaline batteries this OLED lamp will not however be mass produced for consumer sale for now. The battery pack can also be hooked on to other devices to juice them up via USB.

Measuring about 146 x 100 x 18.5mm and weighing in at 180g without the batteries, this lamp will help bring some light in the darkened out lives in Japan.
[Techon]