The iconic every New Year’s Eve Ball that glows with all it’s glory and takes a one minute trip down at the Times Square had a lot of green in it this year. Designed by Waterford Crystal and Philips Lighting, this gigantic ball was illuminated by thousands of little LED lights. Also, the 2-0-1-1 sign used human power to light up its LED’s instead of the energy sucking halogens! The Duracell Smart Power Lab has lent a helping hand into powering this one up with some green energy. The New Year Ball consisted of 2,688 crystal triangles, 2 feet in diameter, weighing 11,875 pounds and containing 32,256 Philips Luxeon Rebel LEDs. With 672 LED modules each containing 2 red, 12 blue, 12 green, and 12 whites, these can be programmed to display different patterns.

Nothing brings in a New Year cheer like this LED powered ball at the Times Square! 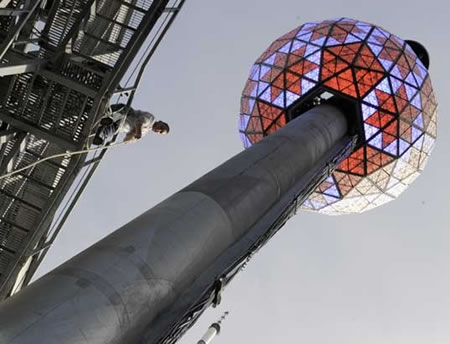