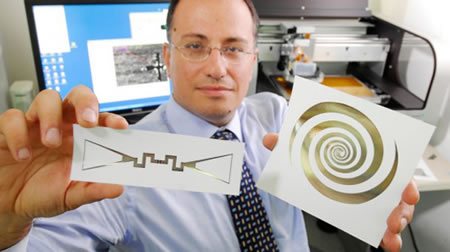 And if you’ve been under the impression that the air around you can’t really amount to much, besides filling up your lungs with enough oxygen to keep you alive, think again! We’ve heard of air being used to power up stuff before, including vehicles. Researchers have now developed a mighty way to suck electricity out of the air, and we aren’t making mountains out of molehills! These antennas are printable, and were shown off at CES, capable of using energy flowing around in the form of signals, to power up smaller devices. Well, you probably won’t be charging your mobile phones with technology like this, at least not for now. However, they do pretty well juicing up sensors used in everyday applications, without the need for battery connections!

It’s only a matter of time, when the same signal sent out by telecom towers begin to juice up our mobile phones too, and this might amount to a bit more than just a day dream.
[Dvice]