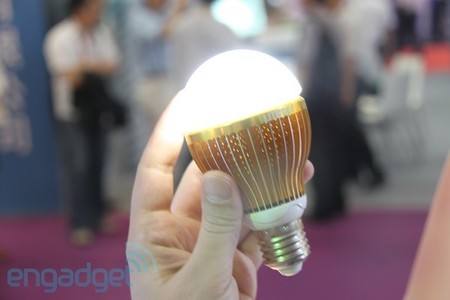 Well, apart from all the technology used in this one, it’s sure to raise a few eyebrows too, taken that it seems at first like a magic trick. Imagine pulling out a bulb from a socket and still have it glowing. You’d probably see David Blaine do that. It’s an old trick; now that Lite-On’s Mobile Lamp is here. Now we all love traditional shapes, it comes to the same for bulbs too. So, manufacturers pop in some LEDs into a bulb for that good old light bulb look, with energy saving LEDs inside. This leaves a lot of space for an additional battery in the bulb, which alternatively lights it up for around two hours when the power is turned off.

To switch it on, simply touch the bulb’s copper part using a conductive material to touch the metal part at the bottom. And presto! It switches on without actually shoving its bottom in an electrical socket! Is it the magic in your hands? No! A green innovation put to use smartly? Hell yeah!
[Engadget]