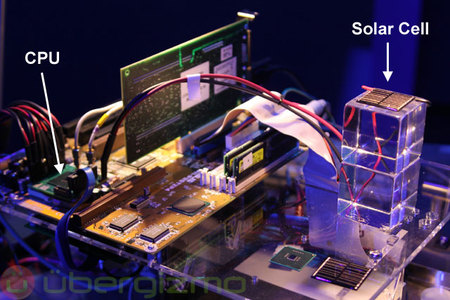 Well, it’s about time the computing world turns to some pretty serious green technology, and a good start-off is this CPU powered completely by a single solar cell. Shown-off by Intel, it’s always been common knowledge that powering up electronics can be a pain while using solar panels, let alone a single solar cell! And Intel proved just how efficient computing could get with this CPU, capable of running windows with energy from a solar cell. Now don’t go expecting an entire computer to power up with a cell. The motherboard and the rest of the PC were powered by a regular power-supply.

A technological breakthrough though, the CPU could simply be just the start, with complete desktop PCs going solar powered and energy-efficient in the near future!
[Ubergizmo]