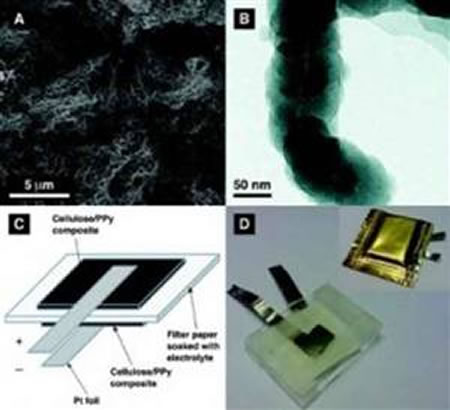 If you enjoy fishing as a hobby, then you would have encountered green and smelly algae growing around fresh water steams. If you thought they were really good for nothing, then there are scientists working rather hard to prove you wrong! Imagine powering a “slim” phone of the future with them! Batteries which seem to be a feasible alternative to electricity crisis are usually bulking and made of metal, which adds to harmful wastes if not disposed and recycled cautiously. And so efforts are being made to come up with flexible, lightweight, inexpensive, environmentally friendly alternatives that too made of nonmetallic components. One favorable material for such batteries seems to by conducting polymers, but they seem to deteriorate in use rather rapidly. Scientifically called as “Cladophora” these algae hold the key ingredient for these batteries: cellulose, and that too almost one hundred times the amount usually found in paper.

This helps researchers to increase the amount of conducting polymers which in turn enhances the ability of these polymers to hold and recharge and discharge electricity better. While normal paper based polymer battery records a 50 percent drop in the amount of charge after 60 cycles of discharging and recharging, the Cladophora backed batteries showed a mere 6 percent loss through 100 charging cycles. These batteries will have very thin layers of polymer, only 40 to 50 nanometers or billionths of a meter wide coating algae cellulose fibers only 20 to 30 nanometers wide which will be collected into paper sheets. These batteries are touted to hold anywhere between 50 to 200 percent more charge than any similar conducting polymer batteries. They also recharge faster, anywhere between 11 seconds to 8 minutes which is faster than conventional batteries. These Cladophora backed batteries would work best with flexible applications such as packaging and clothing.
[MSNBC]