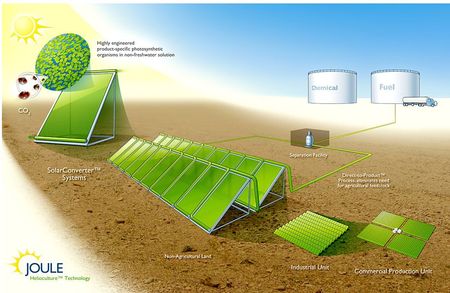 Though biofuels are an acceptable alternative to conventional fossil fuels, their production is not commercialized on a large scale due to various problems associated with them such as disposal of the waste generated. Joule Biotechnologies has invented a new concept in making biofuels which provides all the benefits of biofuels without their problems. This method uses “solar walls” which capture photons from the light and provide them to the proprietary micro organisms. These micro organisms are specially modified by the company so that they use the energy available from photosynthesis to make fuels rather than growing themselves. This method uses a technique called ‘helioculture’ which integrates the photons with available CO2 and water. And that’s not all, this technique can even use impure water and it does not generate any waste.

According to William Sims, CEO of Joule Biotechnologies, this technology can be used to produce diesel at an unbelievable cost of $30/bbl. Although many biofuel concepts have promised, not many have delivered. But for the good of the environment, let us hope this one does.
[solarfeeds]