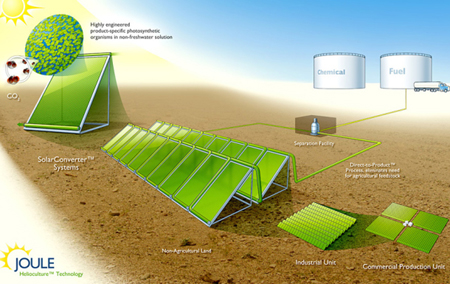 No-one probably thought of mixing up a bit of water, sunlight and carbon dioxide to make fuel before, until now. Joule Unlimited has come up with concept that has received Patent No. 7,794,969 recently. The firm developed an engineered form of cynobacteria, blue – green algae basically, growing in water that secretes biodiesel fuel, all with the help of waste carbon dioxide and water. According to Joule, this can be done in glass bioreactors, to produce biodiesel directly. Using two enzymes with cyanobacteria, the process creates an organism that can create hydrocarbons or chemicals. The system for now is being tested to create diesel and ethanol.

With this, the Cambridge, Mass-based firm, Joule Unlimited could help the world create diesel for as low as $30 a barrel! Hopefully the technology and process is used on a larger scale soon, at least till the world completely switches over to renewable energy sources.
[news.cnet]