Solar energy can be made in your office too 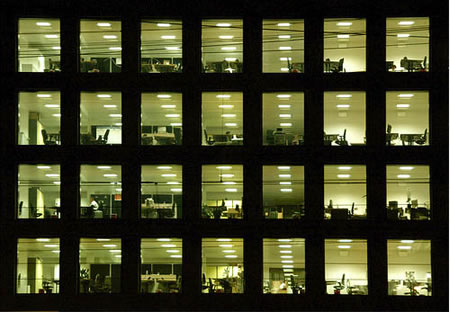 If you thought you can make solar energy only with the help of the sun, time to think again. You can now make solar energy with the fluorescent tubes that keeps buzzing on top of you. And where do see them the most. In your office! New Energy’s solar cells in their transparent SolarWindow generate electricity by using the visible light in artificial fluorescent lighting typically installed in offices and commercial buildings. Researchers tested the ultra-small solar cells on a 1”x1” substrate against today’s popular solar materials for their capacity to produce electricity under varying artificial light conditions, mimicking the levels of light exposure in homes and commercial offices.

Under normal conditions, the results were very surprising. The ultra small solar cells produced 8-fold greater output density than copper-indium-selenide and a 10-fold greater output power density than flexible thin-film amorphous-silicon. This technology for a start could be used by solar powered calculators and iPods. But yes, there is a greater application waiting to be tapped.
[Cleantechnica]

Posted in Topics:Awareness and Hype, Tags: , Solar_energy on September 15, 2009