Coca-Cola and Pepsi vie for ‘Who is the greenest of all?’ 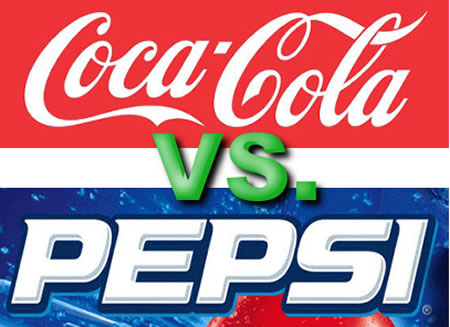 Greenlaunches has been following the green war of the Cola giants. We have kept a tab on Coca-Cola’s green moves and Pepsi’s green steps. Today I am back with more insight on this Green Cola War. A certain study states that neither of them is truly green. This means that they are playing the role of main culprits in leaving significant carbon footprints and water polluters. However this latest report clarifies a few things about both these companies. It is revealed that about 2.47 liters of water make one liter of Coca-Cola. And if you intend to compare this figure to its rival then its difficult as Pepsi doesn’t reveal detail about their production.

On other hand, Pepsi offers 100% of all its electricity consumption. They are also one of the largest buyers of renewable energy credits and have LEED certified offices. On the contrary, Coke does incorporate some elements of green design.
Both the cola giants score almost equal when it comes to eco-packaging. Coke does well in light-weighting, and both its cans and bottles contain significant amounts of recycled inputs. Pepsi has the highest overall average recycled content in its PET bottles.
When it comes to bringing these soft drinks to your door-step, Coke wins because of the number of hybrids it has added to its transportation fleet. But Pepsi isn’t going to be left behind and is beginning to analyze its transportation impact.
Finally we can conclude that in this race of who is the greenest of all, Coca-Cola manages to emerge as a winner, though with marginal difference.
Image

Posted in Topics:Awareness and Hype, Tags: , "carbon footprint"Coca-ColaCokeColaGreen_warPepsi on April 6, 2009