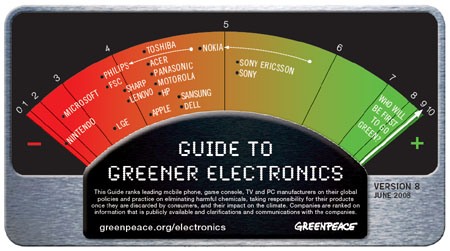 Sony and Sony Ericsson (SE) may have topped Greenpeace’s latest Guide to Greener Electronics, but almost all manufacturers saw their scores plunge thanks to new, more stringent marking criteria. Greenpeace decided that it was now necessary to make the grading system tougher and to create additional grading criteria. For example, it added more toxic compounds to its list of materials manufacturers must commit themselves to eliminate and provide a timeline for that process. Chemicals added to the roster of nasties include beryllium in all its forms and compounds of antimony. That’s were Apple failed, in the previous report it scored 6.7 but, has since seen its score drop to 4.1. Greenpeace admitted that the firm’s timeline for PVC and BFR phase-out is positive, but slapped the iPhone maker on the wrist for failing to provide a timeline over which it’ll withdraw use of other Earth-damaging chemicals, such as beryllium. It also lost points over its use of recycled plastic content; it’s somewhat sketchy information about plans for the reduction of its carbon footprint, and failure to provide any information about the amount of renewable energy it uses, if any.

Microsoft scored just 2.2 “miserable” points and is heavily criticized for just about everything, ranging from the amount of recycling it does to the efficiency of its new models. The firm doesn’t even have any products free of PVC and BFRs.
Nintendo was awarded a “pitiful” 0.8 points because, although it’s in the process of phasing out PVC use from packaging, timelines aren’t given for, say, withdrawal of PVC and BFRs from products. Oh well, at least the company’s executives have Wii Sports to take their frustrations out on.
Source