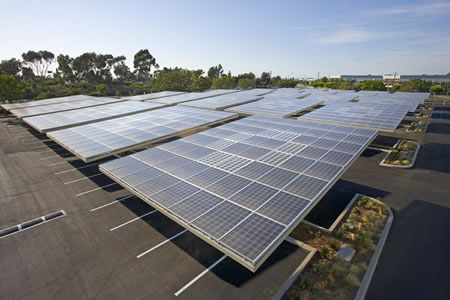 Solar power generating parking lots have been around for quite a while now. We’ve seen the one planned for the Industry Metrolink Station in California and the Canopy Parking Lot at the Denver International Airport before. The world’s largest parking lot of this kind will soon find a home in Saudi Arabia’s Aramco headquarters. What will also be the largest solar power generating facility in the kingdom, this one will be built by Belectric and Sun & Life in Dhahran. This 10 megawatt Photovoltaic Carport will be built at the North Park offices and will boast 4,500 parking spaces in all. The system will make use of 120,000 copper indium selenide photovoltaic modules to be supplied by Japanese Thin Film leading firm, Solar Frontier.

Just recently we had reported on the kingdom turning to renewable energy, in an effort to decrease the use of oil, the major export of the country. Seems like the oil barons of the world have realised the need for renewable energy after all!
[Bi-me]