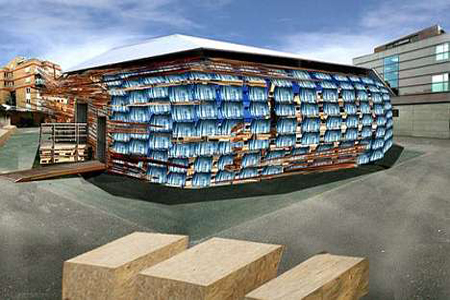 We’ve heard of things being recycled and reused, giving them a new life and decreasing the stress on landfills to get rid of them. Well, recycling is now being taken to a whole new level. Here’s an entire theater made from recycling. UK will play host to the Jellyfish Theatre by Berlin-based architects Köbberling and Kaltwasser. The theater will be made from scrapped theater sets, which will be recycled into the building blocks of this entertainment building. Kitchen units are to be donated by the public, while the team heads out for a scavenger hunt for unused stuff in construction sites.

Two plays, Oikos, by Simon Wu and Protozoa by Kay Adshead have been commissioned by The Red Room for this theater. Props and sets will be crafted from recycled stuff too. The Jellyfish will take around six to eight weeks to complete, with volunteers being invited to help and the public being asked to donate their unused thrown-away. The theater needs lighting too, and perhaps a few renewable energy sources could help. A £250,000 hire charge for the site has been waived by the Southwark council. Nothing gets better than watching a play in a recycled environment!
[Thestage]