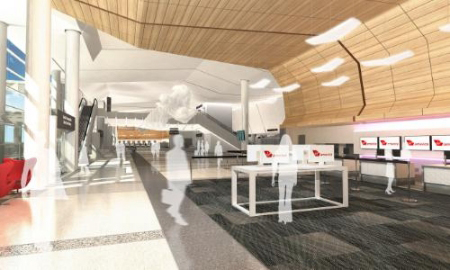 After being renamed from the Central Terminal at San Francisco International Airport (SFO) to the International Terminal and finally shutting down to passenger use, the T2 terminal will now swing its doors open in the spring of 2011, with a shade of green. With a bunch of changes being brought about by Virgin America, this will be the first LEED Gold certified airport terminal in the United States. Seven of the fourteen gates will be used by Virgin America, while the rest of the space will be shared with American Airlines. The terminal boasts natural lighting, energy-efficient HVAC, water reuse program, recycling of construction and demolition debris and will turn into a hydration station of sorts.

And with that, the airline industry gets an added touch of green. Virgin America sure deserves a pat on its back for the clean job done!
[earthtechling]

Posted in Topics:Architecture, Tags: on November 26, 2010