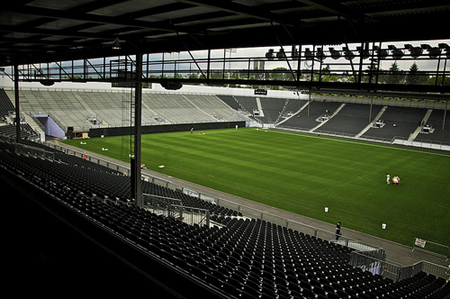 We’ve seen quite a few eco-friendly and environment friendly stadiums like the Thyagaraj Stadium in New Delhi and the Moses Mabhida Stadium in Durban before. Here’s yet another one that takes the whole idea of involving green in sports to a whole new level. This soccer stadium in Vancouver, known as the Empire Field Stadium, has its field made partly of recycled tires, 22,450 of them in all. This soccer stadium uses 346,000 pounds of crumb rubber made from tires. This is the largest installation of crumb rubber in all of British Columbia, which has given 22,450 scrap tires a new life of sports. The rubber is used as an additive to the soil with an improved drainage and provides a level of cushioning to keep away nasty on-field injuries.

The field will play home to a Canadian Football League team and a new Major League Soccer team that will start play in 2011. The stadium is a temporary one, and will be dismantled later to be transformed into a community playing field. Sports fields get greener than the grass blades sticking out of them.
[earth911]