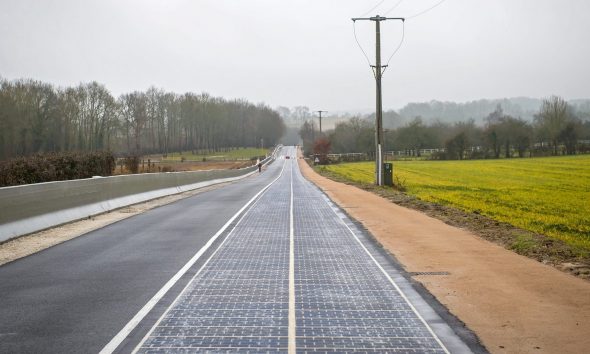 One kilometer and 2,800 square meters of solar panels in French village Tourouvre-au-Perche was officially inaugurated by Ségolène Royal, France’s Minister of Ecology, on December 22, 2016. Marking the launch of the world’s first solar panel road, this is also part of France’s ultimate aim to cover 1,000 kilometers of roadways with solar panels. Royal stated that she’d like to see solar panels installed on one in every 1,000 km of French highways.

Before officially opening the road, the panels were tested at four car parks across France. Output and lifespan being the two fundamental factors of consideration, this new solar road will be tested for a period of two years. During this trial run, it will be used by roughly 2,000 motorists daily, to understand if it can generate enough energy to power street lighting in the 3,400-person Normandy village. 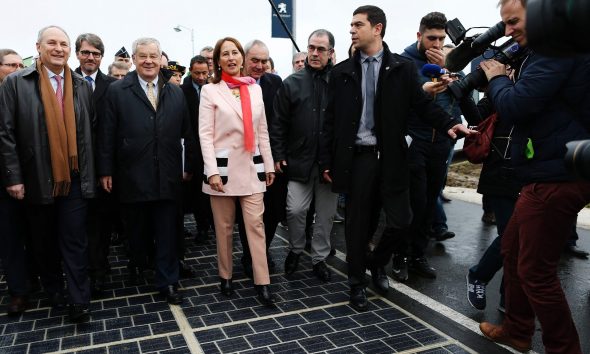 Wattway expects that this solar panel road will have the potential to generate 280 megawatt hours of power on a yearly basis, and the daily production would vary in line with the weather. They also stated that a per day electrical output of 767 kilowatt-hours is expected, which could go as high as 1,500 kilowatt-hours daily, during summer.

Jean-Charles Broizat, Wattway Director, stated in a press release, “We are still on an experimental phase. Building a trial site of this scale is a real opportunity for our innovation. This trial site has enabled us to improve our photovoltaic panel installing process as well as their manufacturing, in order to keep on optimizing our innovation.”

While critics opine that this is not a cost-effective use of public money, the company says it hopes to eventually bring down the production costs of the solar panels. They also said that they have around 100 other solar-panelled road projects, half of them in France itself.