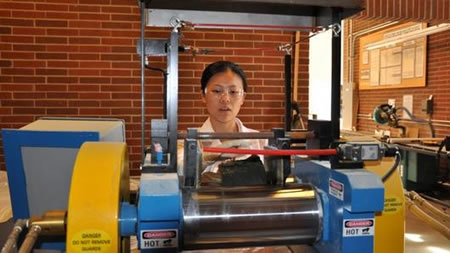 According to sources, the wheel was invented when a caveman saw a tree rolling from a slope. He got the idea well conceived it well and now we have high tech tires on our cars. It is also the greatest invention of man. Seriously! Imagine yourself in a world without tires. Nothing would run or move! Even your clock! But now the scientists are moving back to Stone Age by going back to tires made from wood. Well they are not telling that they will make the entire tire from wood but replacing silica with microcrystalline cellulose derived from plant fiber as reinforcing filler in the manufacture of rubber tires. The end result, costs less, performs better and saves on fuel and energy. This is what a team of science researchers at Oregon State University is doing and stating.

They have replaced up to 12 percent of the silica used with microcrystalline cellulose. This decreased the amount of energy needed to compound the rubber composite, improved the heat resistance of the product and also retained its tensile strength. It also had improved traction compared to conventional tires. But more research is required to confirm the long-term durability of tires made using microcrystalline cellulose and they are hoping they will last longer.
[Gizmag]