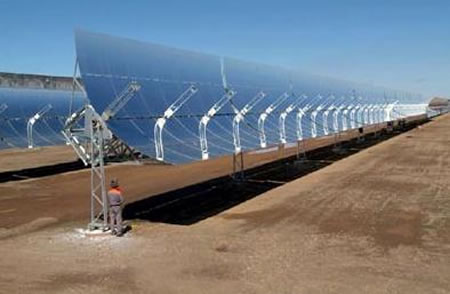 The United States of America is going down hard on fossil fuels and seems desperate to make a change, brining in renewable energy on a larger scale than ever. The U.S. Department of Energy is now pumping in a whopping sum of $2.1 billion in conditional loan guarantees to aid the world’s largest solar power plant, to be constructed near Blythe in California. Using the big bucks, two units of Solar Trust of America’s 1,000 megawatt solar thermal Blythe Solar Power Project will be constructed. A joint venture by German companies Solar Millennium and Ferrostaal, the project will generate about 484 MW of electricity using solar thermal trough technology, besides creating over 1,000 construction jobs and 80 operations jobs!

With this massive solar power plant, the country will also wipe out greenhouse gases equivalent to that emitted by 123,000 vehicles! A big sum of money being put to good use after all!
[Cnet]