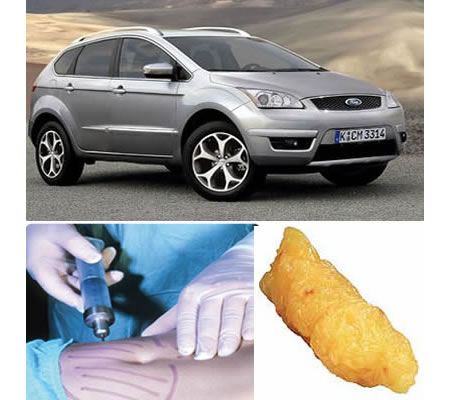 ‘One man’s junk is other man’s treasure’ Excuse me for repeating this adage again, but I couldn’t describe this news any better. However re-read it as one man’s fat is other man’s fuel and it will make more sense. Most of us know that liposuction is the easiest way to flaunt a svelte toned figure and right from celebs to layperson, every body has been through it. And Dr. Craig Allen Bittner, a plastic surgeon, who earns his bread and butter by sucking out fats from under the skin is using that same fatty trash to run his car. Inspired by his patients to do so, the doc fueled his Ford SUV and his girlfriend’s Lincoln Navigator with the biodiesel derived from the blubber. It’s the triglycerides in the fat that can be extracted and turned into diesel.
image for representational purpose only

However the green doc is facing an investigation as using fat to fuel cars might be environmentally friendly, but it’s definitely illegal in California to use human medical waste to power vehicles.
Its isn’t novel to derive energy from fats as poultry companies such as Tyson are looking into powering their trucks on chicken schmaltz, and biofuel start-ups such as Nova Biosource are mixing beef tallow and pig lard with more palatable sources such as soybean oil.
[Gizmodo] Via [Forbes]