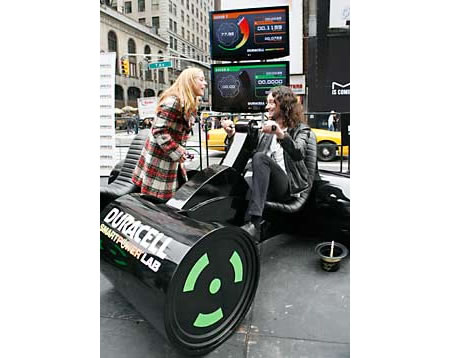 Just like last year, when Times Square used energy generated by riding a snowmobike to power the New Years Eve lights, Time Square has decided to take a cue from its own actions and this time around once again they have decided to go the green way. New York which is always an over crowded city is going to thoughtfully make the most of its population this new years. For the 2010, Duracell unveiled its smart power Lab where tourists and even the locals can burn some o their energy by simply pedaling away on a ‘Power Rover’. The energy thus generated by the people will be converted and used to light up the 2010 numerals when the ball drops on New Years Eve. This Smart Power Lab is located right next to a Charmin-promotes bathroom which also facilitates a rechargeable point where even Xbox games can be played and pictures can be taken with the replica of life sized 2010 numerals.

As I’m seeing, festivities are on in full swing, but they are also taking care about the environment, which is the crucial need of the hour. And especially at a time like New Years and a place like Times Square, launching of this campaign is going to have the most positive impact on people, I’m sure.
[GoodCleanTech]