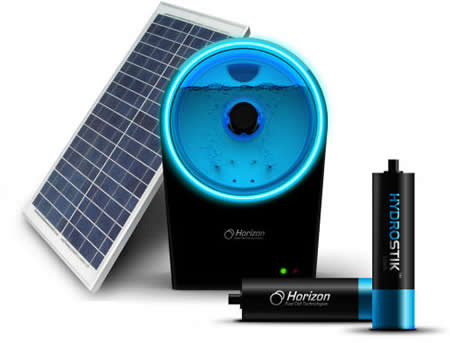 The HydroFill by Horizon Fuel Cell Technologies revolutionizes the way we go about charging our gadgets at home. This device will help juice up our phones, cameras, mp3 players and other gadget using electric
current produced from hydrogen. The HydroFill stores hydrogen energy extracted from water in Hydrostick cartridges with a hydrogen absorbing metal alloy. A pocket sized fuel cell charger is required to charge electrical devices. Called as MiniPak, this device pulls hydrogen energy from the cartridges producing an electric current that is used to charge up your gadget. The optional USB port and cell phone adapter can also be used to charge. If that’s not enough, the cartridges can be charged using a normal electrical output, or a solar panel and even wind turbines! The system can generate 2.5 Watts of power ideal for using with small gadgets. The HydroFill system, scheduled to release later in 2010 sure paves the way for hydrogen fuel cell technology.
[Cnet]