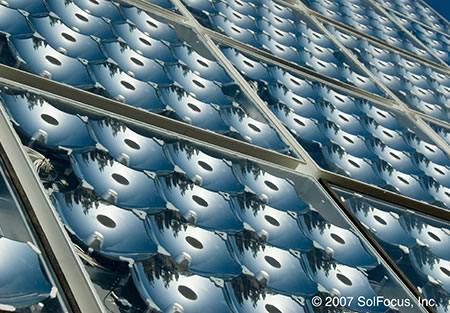 After penning down superlative terms like fastest and greenest, it is now time to bring our eco-readers’ attention to a project that flaunts the tag of being the largest. SolFocus, the makers of solar concentrator photovoltaic (CPV) systems, has signed a 100 million dollar ($103 million to be precise) deal with EMPE Solar. This mega project will help to generate substantial energy for a population of 40,000 folks. It involves installation of more than10 megawatts of CPV power at sites in southern Spain. Already basking under the success of their recently completed smaller projects in Spain for the Institute of Concentration Photovoltaic Systems, SolFocus aims to carry on their lead in this field by spreading their expertise on a larger scale. Though the company is modest enough to declare that this the largest CPV project in Europe, the eco-buzz is that it will be the largest in the world. Roll over for a brief account on the functioning of CPV system.

CPV technology can be implemented best at the high solar resource areas of the world. SolFocus CPV makes us of easily available and affordable materials such as glass and aluminum to provide rapid scalability to 100’s of megawatts of solar electricity. Using mirrors and advanced reflective optics, SolFocus modules concentrate the sun’s rays 500 times onto a small high efficiency solar cell resulting in use of 1/1000 the amount of photovoltaic material used in traditional PV systems.
Moreover this system is also 95% recyclable because of the raw materials used, like aluminum and glass. Within a year of installation, it can help to curb the release of about 27,000 tons of CO2 emissions. The technology also offers the lowest operation this 10 megawatt installation will eliminate the generation of 27,000 tons of CO2 emissions which would have resulted from traditional fossil fuel energy generation. Such a green technology also aims to leave faintest carbon footprints.
We sincerely hope to see such clean, green, alternative energy projects in every corner of the globe, thus freeing us and our environment from the tormenting clutches of fossil fuel resources.
Source