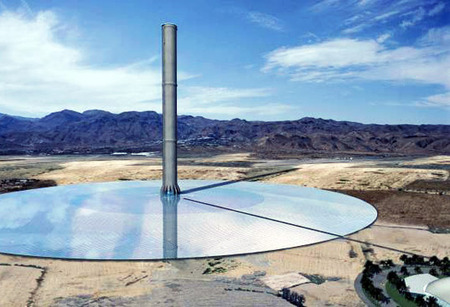 Anything packaged in a new and better way, sounds new and better. Similarly the concept of solar updraft technology has been reintroduced, this time by Australia-based EnviroMission Ltd. They have announced plans to build two solar updrafts spanning hundreds of acres in La Paz County. The solar updrafts technology is a tall solar tower generating energy by forcing heated air through a shaft lined with wind turbines. By turning the wind turbine, energy is produced. The towers will each have 2,400 foot chimneys over a greenhouse measuring four square miles.
[Inhabitat]