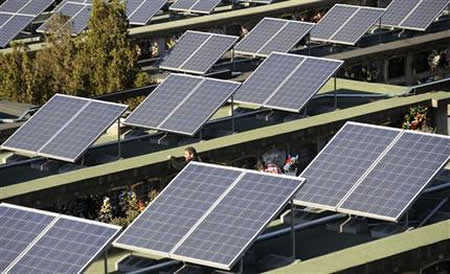 Though acres of graveyards only provide a peaceful accommodation to all the dead bodies world wide, a small town outside Barcelona, Spain begs to differ on that trend. The city council and the authorities of the Santa Coloma de Gramenet cemetery are wise and green without doubt. They have installed 462 solar panels on top of the grave niches which in turn power up the local energy grid. The energy generated is equivalent to the yearly consumption of 60 homes. Started about three years back, this project saw day light last week. Such a location provides an ideal solution for towns and cities that crib about lack of space to install such eco-friendly projects.

The cemetery holds the remains of about 57,000 people and the solar panels cover less than 5 percent of the total surface area. They cost 720,000 euros ($900,000) to install and each year will keep about 62 tons of carbon dioxide out of the atmosphere.
Esteve Serret, director Conste-Live Energy, a Spanish company that runs the cemetery in Santa Coloma and also works in renewable energy, rightly stated that, “The best tribute we can pay to our ancestors, whatever your religion may be, is to generate clean energy for new generations.”
Source