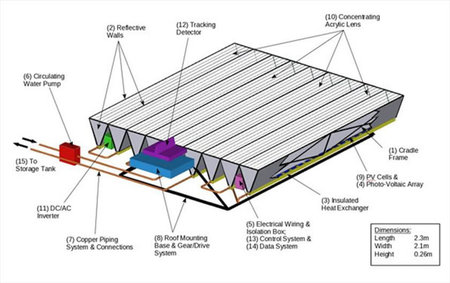 While soaking up the sun’s energy, solar panels tend to release a whole load of heat energy, which is wasted. The guys at the Royal Melbourne Institute of Technology had a brainwave and came up with the Technique Solar Module, a device that uses this heat energy to heat water instead of letting it go waste. Combining a solar electricity system and a water heating system, these panels use a series of channels equipped with concentrating acrylic lens and reflective walls that help focus the sun’s rays on solar cell strips. These cells generate electricity while a heat exchanger placed below these cells heats circulating water stored in a tank.

The company claims that this system requires lesser solar cells than the usual PV arrangement with an increased efficiency of 50% – 60% as compared to the 15% – 18% delivered by flat plate solar panels. Each 3.5 meter module generates around 400 Watts of electricity and 1700 Watts of heat. Why waste heat energy when you can warm up water using it instead?
[Image]
[Energymatters]