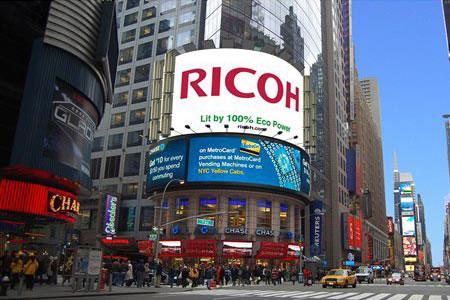 Time Square in the dark is now impossible to imagine, with its Las Vegas like lights flashing with adverts, it makes it an overwhelming sight for the first time tourist. Yes looking at that makes us wonder as to how much power is being consumed and in turn wasted when the street is desolate. Japanese electronics maker Ricoh has decided to do something radical in spirit of the environment. It is erecting a 47 x 126-foot billboard at Seventh Avenue and 42nd Street that will be completely powered by the sun and wind. Fueled by 45 solar panels and four wind turbines, the billboard won’t even need a backup electric generator.

On days that the sun and wind aren’t enough to power it, it will just switch off. The billboard is designed to reduce carbon dioxide usage by 18 tons a year. What a nice way to say we care by one of the leading countries in environmental consciousness, in the city of the world.
Via