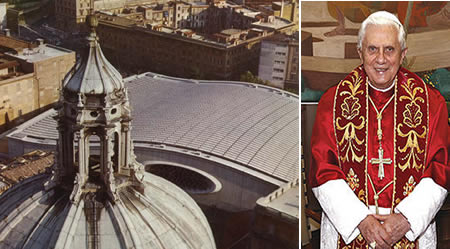 And you thought that priests only pray to God for well being? Allow me to correct this myth. In a move to make Vatican more clean and green, the current leader of the Roman Catholic Church and head of state of Vatican City, Pope Benedict XVI held his first green audience yesterday. About 9,000 attended the green service under the solar roof of Paul VI Hall. In all, 2,400 solar panels on the roof above the Pope’s head converted sun rays into electricity to light and heat the hall.

Designed by a German company, such a green roof is estimated to power up, not only the hall, but also several of surrounding buildings with 300 kilowatt-hours a year. Further more, the system will also allow the 108-acre city-state to cut its carbon dioxide emissions by about 225,000 kilograms and save the equivalent of 80 tons of oil each year. And it is not going to end here. The Vatican is aiming to install enough renewable energy sources to provide 20 per cent of its needs by 2020. No doubt, Pope Benedict XVI is dubbed as the “Green Pope”.
Source