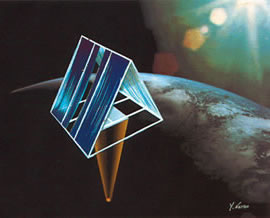 There is enough money flowing within various sectors in this world, even after extreme, extravagant, luxurious spending. Some of the big industrial lords felt that it is about time they started using that extra bit of money for something more useful, like harvesting solar power from the space through solar farms. Mitsubishi Electric Corporation has announced an AUD $25 billion Japanese project to construct a gigantic solar farm in space within 30 years. Currently, the Japan Aerospace Exploration Agency (JAXA) is working on developing the technology for a 1-gigawatt (enough to supply around 294,000 average Tokyo homes) solar farm that consists of four square kilometers of solar panels. These will be stationed 36,000 kilometers above the earth’s surface.

But before deploying it, the JAXA will launch a small satellite decked out with solar panels in 2015 in order to test beaming electricity from space. The Institute of Space and Astronautical Science (ISAS), part of JAXA, is working on an experimental satellite plan for wireless power supply of several hundred kilowatts. Aside form all this, for safe measures, ground experiments are being conducted to examine the influence of high-voltage discharge necessary for large-capacity power generation in space and the impact of space debris.
Via – [Newlaunches]