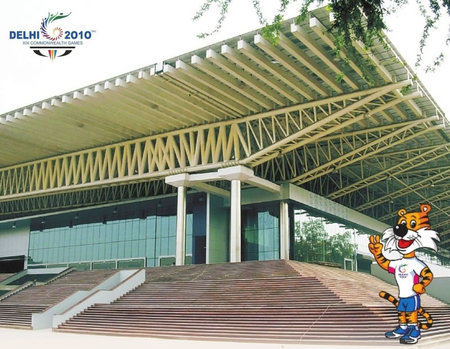 Remember the Thyagaraj Stadium in New Delhi being built for the 201 Common Wealth games? Well, Reliance Group’s solar energy initiative, Reliance Solar, has just plugged in what will be India’s first one-megawatt (MW) solar plant to the stadium. This stadium is in fact something to look up to in India, an example set, with a host of green features, which hopefully other stadiums will look up to and follow. Owing to the fact that a 1MW plant will help power it up, the stadium will keep away as much as 1,200 tons of carbon dioxide (CO2) emissions annually. When unused, the power generated will be returned to the grid too, which will help relieve the strain on other power plants around to some extent. Expected to generate around 1.4 million units of electricity per year, the plant was installed and commissioned in a record braking duration of less than 3 months in the country.

The Thyagaraj Stadium sure has gone a shade greener, thanks to the Reliance Group’s efforts and the upcoming Common Wealth games, which has led to this makeover. Maybe hosting a few more world games like this will help India go a bit greener, at least when it comes to sports!
[Common-wealth-games]