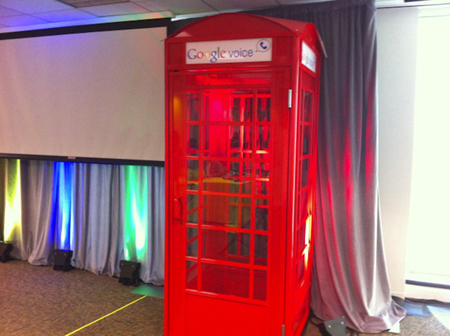 The next time you enter into a phone booth, you won’t need to pick your pockets for change, that’s if you step into a Google Voice booth. The Google Voice that we’ve heard of from Gmail before now finds its place in phone booths. Designed like those good old phone booths you’d usually step into in Britain, red with squares of glass and wood, the Google Voice phone booths being constructed by Google will be set up in places where phones are most needed, especially college campuses, for people to make calls for free! So what powers up Google’s effort to ease communication? Solar power! Oh yeah, this one’s powered by the sun, with solar panels sunbathing on its outside.

Hopefully Google get on with these plans soon enough and we see some of these phone booths sprout up in our college campuses! Making a call from a phone booth will never be the same again!
[fastcompany]