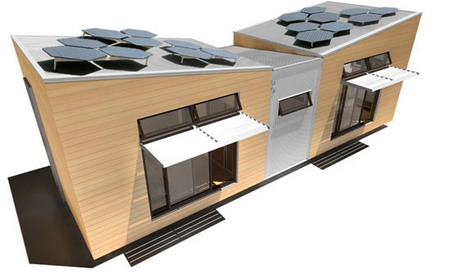 Going Solar has been always easier said than done because of many logistics factors apart from its efficiency. They are mainly sheer magnitude and number of solar panels that would be needed to generate enough energy to run a household and cost effectiveness. Technology is changing it all and Armageddon’s Three Leafed SolarClover design for rooftop solar panel takes care of all these issues including the cost. These hexagonal solar panels are made of silicon solar cells embedded on Teflon held by polymer structure (instead of glass ones used in standard solar panels) and hence are light in weight. Each three solar panels unit which forms one SolarClover generates about 400 watts of electricity at the cost of $6/watt (one dollar less than industry standard). So it does make going solar not just green but cheap too.

You can cover your home’s rooftop with few such SolarClovers to take care of your some electricity needs if not all. It seems setting up these solar panels with triangular frame and micro-inverter on rooftop is not very difficult. Aesthetically too it is an awesome design for rooftop of your ecofriendly home, isn’t it?
Via Dvice