Glass roads, the next best way to keep the snow away 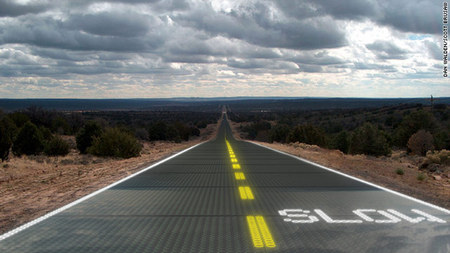 Snow covered roads might just be phenomena of the past, with technology like the solar powered Smart roads, a solution by Scott Brusaw, a 53-year-old electrical engineer from Sagle, Idaho. Now the United States of America has had its share of road covered snow before, and Brusaw’s idea has already generated a load of interest from General Electric. The design includes a roadway made from super-strong glass, instead of the traditional concrete and asphalt. The glass surface will pack solar cells below that will help the whole road surface turn into a massive solar panel, generating solar energy. The energy will then be used to fuel embedded heating elements, keeping away the use of expensive snow removal instruments and plows. That’s not all. The electricity generated can also be used to power up your electric cars and help switch on LED warning signs on the road surface!

Glass roads aren’t far off in the future, and might just show up pretty soon, a better alternative to asphalt and concrete when it comes to keeping away the snow and generating power at the same time.
[CNN]