Florida to soon power up the largest Solar Power Plant 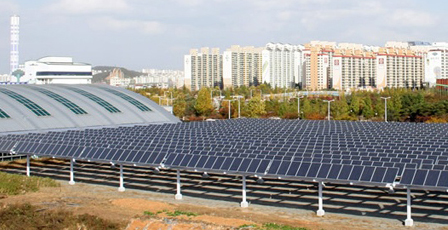 RFK Jr once said that the Midwest is the Saudi Arabia of wind power, and Florida is the Saudi Arabia of solar. Florida has almost no hydroelectric, so it principally gets energy from Natural Gas, Coal, Nuclear, and miscellaneous sources (including 2/3 of the nation’s petroleum coke and significant petroleum liquids). Specifically in 2004 (the last year for which I have data), 29% of the energy was produced from Coal, 36% from natural gas, and 15% from nuclear. Which is perhaps why, Florida Power & Light Company recently announced that its DeSoto Next Generation Solar Energy Center in Arcadia will begin generating electricity later this month.

The Solar power plant took less than a year to construct and uses over 90,000 solar panels. Annual estimated electricity generation of the solar farm will be approximately 42,000 megawatt hours or enough power to serve about 3,000 homes. So here’s a big hurray to the people of Florida going so green.
Via [EnergyMatters]
.