At first, we thought this one to be the modern rendition of the Biblical Tower of Babel. On a closer look however, this structure turned out to be a wind-harvesting energy generator called the Downdraft Tower. Using vertical currents, influenced by the temperature and consequent weight of air molecules, the tower keeps spraying water on its top that attracts cool dry air and causes it to grow heavy. Turbines at the base of the tower then begin spinning with the wind speeds nearing 50mph, generating about 1,500 megawatts per hour! A revolutionary design that could make those extensive wind turbine farms obsolete, the Downdraft Tower could certainly help turn our grids green. 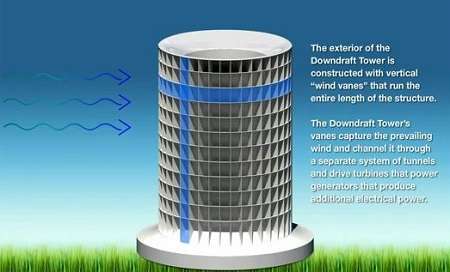