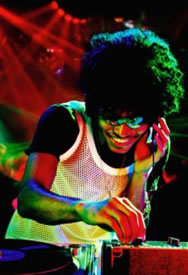 The DJ of this new eco-nightclub better play great music if he wants to keep his turntable working. For if the feet stop thumping so will the power. Britain’s first eco-nightclub, set to open in King’s Cross, will require the patrons to dance on a modified dance floor that will harness the energy expelled by the clubber’s moves and convert it to electricity. This place is so Green-oriented; they even plan on using a recycled water system to flush their lavatories. The Club will also serve organic spirits served in polycarbon cups. Entry to the club will cost £10, but those who can prove that they cycled, used public transport or walked to the venue will be welcomed in free. That’s not it customers will have to sign a pledge before entering the club that they will work towards curbing climate change.

The club will open doors on 10 July and is based at Bar Surya in Pentonville Road, which is owned by property millionaire and Tory donor Andrew Charalambous.
Mr Charalambous is also the head of a new climate change organisation called Club4Climate, said he hoped to use clubbing to inspire young people to tackle global warming. “This is a new way to draw in the young generation,” he said.
“It’s a sexy and fresh approach as opposed to the way young people feel they are preached to by other more ‘grown-up’ charities. “Our aim in opening the country’s first ecological club is to get as many people as possible involved in saving their world.
“There is no greater platform than clubbing to reach out to young people. Having an energy-generating dancefloor is a very exciting and interesting-idea that we have been talking to people in Rotterdam about. Such a dancefloor could generate about 60 per cent of the building’s energy.”