Air-powered battery feeds on Oxygen to run vehicles and gadgets 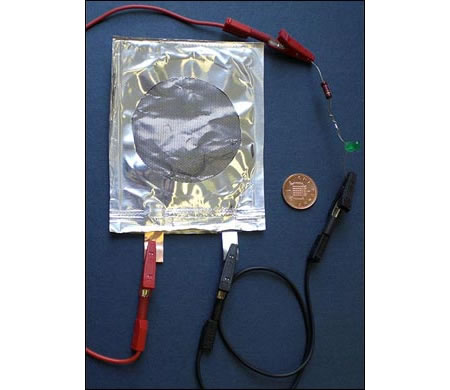 Till now we harped about eco-friendly batteries that juiced up gadgets and vehicles with every other substance like ethanol, corn, water, etc. except fossil fuels. But today we are here to tell you about a cell that runs on air….which can be translated as a battery that breathes like human body. Based on STAIR, St Andrews Air technology, this battery sucks in oxygen and reacts with carbon inside. Such a super cell can open up new possibilities to charge the new generation of electric cars. Also the smaller version can be utilized to power gizmos like cell phones, laptops, music players, gaming consoles, etc. Chemistry professor Peter Bruce is heading the 1.5-million pound project to develop the battery. He states, “The key is to use oxygen in the air as a re-agent, rather than carry the necessary chemicals around inside the battery. Our results so far have far exceeded our expectations.”

It includes an open mesh section that draws oxygen from surroundings for recharging itself. This oxygen then reacts with carbon inside the cells to create more energy and keep the cell charged for a longer period of time. Moreover, the battery claims to offer 10 times the storage capacity of conventional cells and is also said to be comparatively cheaper and lighter.
[TheSun]